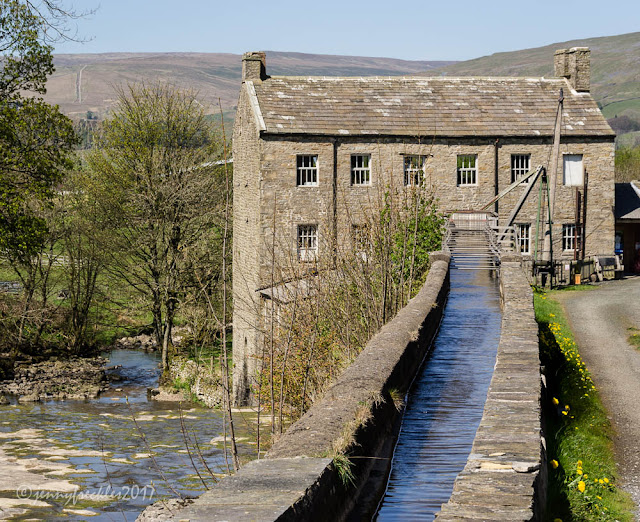 Another tick off my bucket list... Gayle Mill, near Hawes in Wensleydale, has been somewhere I've wanted to visit since it was featured some years ago on a C4 TV programme called 'Restoration'. The programme asked viewers to vote for a heritage restoration project, which would win a grant for its completion. Gayle Mill came in the top three in the national finals and though it didn't win (despite my vote), it attracted sufficient interest for the restoration to be completed.

It is a Georgian mill, originally built about 1784 as a water-powered cotton mill (strangely, as this is the heart of sheep country!). It was turned over to flax and later wool spinning, before becoming domestic accommodation in the 19th century. (There are intriguing remnants of Victorian wallpaper.) Around 1879 it was turned into a sawmill, the waterwheel being removed and replaced by a water-powered turbine that drives various woodworking machines (sawbench, circular saw, planes and lathes) by a series of belts and pulleys from a central lineshaft, as well as generating some electricity to light the mill and some nearby houses. The sawmill closed in 1988 and the building looked set to be converted to apartments. However, the North East Civic Trust oversaw the restoration and the mill is now managed by a trust and used as a working mill, museum and workshop for a variety of heritage skills training courses.

It was fascinating to look round. The volunteer who guided the tour was very knowledgeable and enthusiastic. He explained and demonstrated how the turbine worked, fed from the river via a sluice and down the mill race, seen in my top photo. When the river level is low, there is a mill dam higher up the hill that can feed water to the mill. He showed us these amazing cartwheels (below), explaining how they are made from three different types of wood that have different strengths and flexibility. The iron rim is made smaller than the wheel, heated in a fire and, when expanded, slotted round the rim. As it cools, it shrinks and pulls the wood tight on the spokes. This is a very skilled process. Like many of these country crafts, the skills are dying out and places like Gayle Mill are fighting to keep them alive. 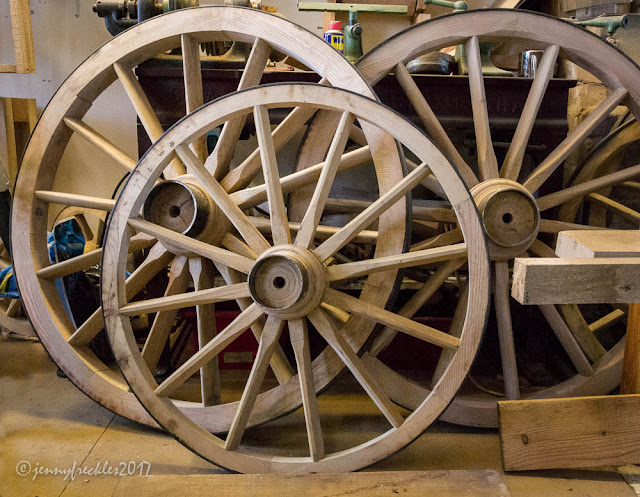