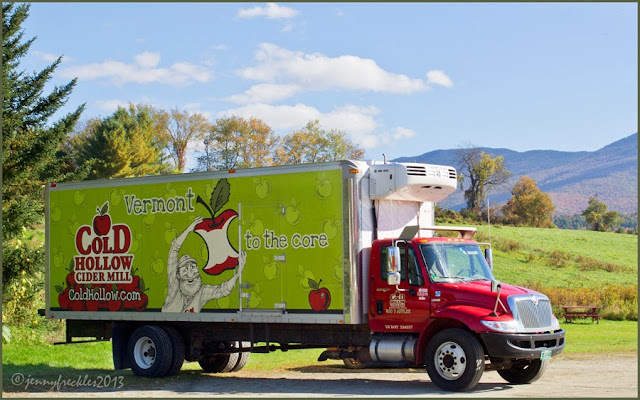 When I first arrived in the USA, I was like a child in a sweet shop, excited about all the 'American' things I've seen in movies.... A fire hydrant - wow! A mailbox - wow! Steam coming out of the pavement - wow! American trucks - wow! Some of those I soon became blasé about, but I have to say that my excitement at the big trucks never did wear off. This was an attractive example, at a cider mill we visited in Vermont. These beasts are very different from British/European trucks lorries, tending to have a lot more bling/shiny bits and those big engines at the front. Most of the trucks we see here have flat fronts, straight down from the windscreen. They're probably just as powerful but they don't look nearly as macho. As for the fire engines - wow and wow again! (I came back with six photos of fire engines.)
The trucks remind me, I guess, of that Kris Kristofferson movie, 'Convoy', that we were nutty about in the late 70s. Ain't nothin' gonna get in their way!