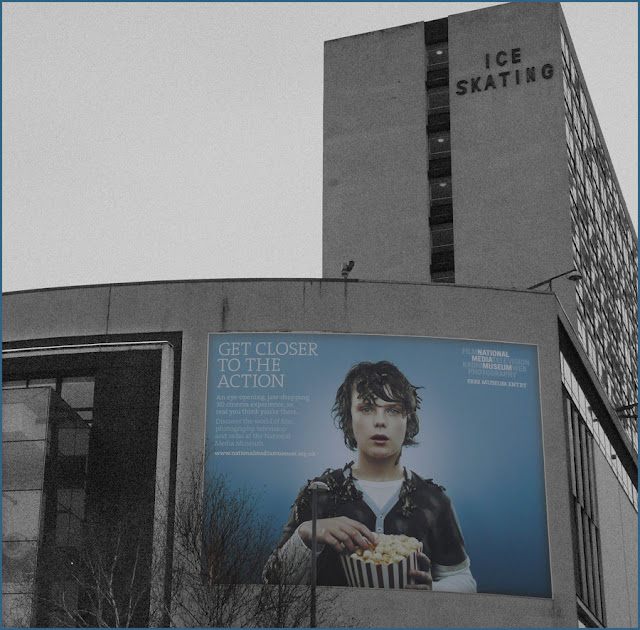 The National Media Museum, Bradford, is housed in a concrete 1960s complex that also holds the ice skating rink and Bradford Central Library.  The tower block was once part of Bradford University and is now student flats.   The museum frontage has been modernised by the addition of a glass atrium and the former library theatre has become a cinema, part of the Museum, which also boasts a gigantic IMAX cinema screen.
I found the following, quoted in 2005 by Dr George Sheeran, of the University of Bradford's Pennine and Yorkshire Studies Unit:
"A lot of the stuff (regeneration) that was done in the Sixties was done on a big wave of optimism about the future, and it did produce some things which unfortunately haven't lasted. If you look at Bradford Central Library, opened in 1966, then it was the biggest library (in terms of the number of books it had) in England which is an astonishing statistic when you think about it. It had a small art gallery, a cafeteria and it had a theatre and people were willing to put their money behind that sort of thing then, and some of the things done in the 1960s were very good.
On the other hand, the architecture was dire. It was on a scale nobody had seen, it was of a design nobody in Bradford had experienced before. I think there was this ideology behind it which saw everything modern as progressive - that was a big word in the Sixties, whether it led to social progress or not, and there was a deep, deep hatred of everything in the Victorian past. In about 1960 there was a Dutch chap who taught planning at Leeds School of Architecture, I can't remember his name, but he called Bradford, 'a city designed by the devil' which I think was an attitude of mind amongst planners. I know which (Bradford) I would rather have."


He speaks for a lot of people. A lot of us mourn the loss of some of the Victorian buildings.  Those that remain have been transformed by stone cleaning and sympathetic renewal.  But it's good to see these 60s buildings being used in a creative way even if they aren't too pleasing to the eye.  There is always a huge poster on the front of the Media Museum and I like the impact of this particular image of the young boy.

(This has had a bit of work in PS - desaturated it, popped the colour back on the poster and added some grain to emphasise the gritty concrete.)
Posted by jennyfreckles at 07:00