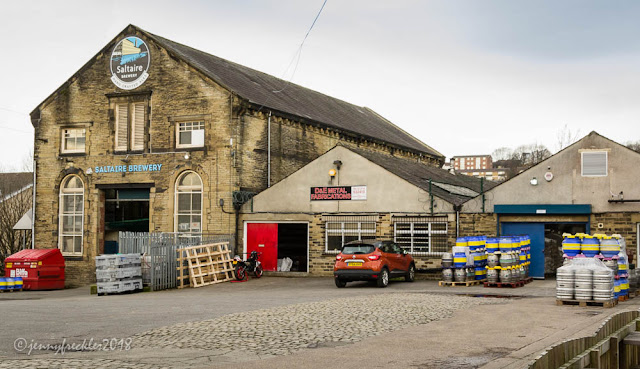 Tucked away down a side street in the Dockfield area of Shipley and overlooking the canal, the Saltaire Brewery isn't actually in Saltaire at all. It isn't far away though, and who can blame them for using the name of the world-famous UNESCO World Heritage Site as their brand name. The craft brewery was established by Tony Gartland and Derek Todd in 2005. The brewhouse is sited in an old generating hall that once provided electricity for Bradford's trams. They now produce around 60 different beers, including their bestselling 'Saltaire Blonde' ('a straw coloured lager ale with creamy, soft malt flavours') and a dark stout called, enticingly, 'Triple Chocoholic' ('a strong chocolate bouquet and a rich chocolate flavour, with a balancing bitterness'). I don't drink beer but I'd be tempted by them if I did. They have an excellent reputation.

There's a Brewery Tap and shop, open Wednesdays through to Sundays (pm only), so you can sample their products - and some from other featured breweries. There's a beer club too, like a mini beer festival, on the last Friday of every month. I've noticed the beers are stocked in lots of pubs and shops, or can be ordered online. No excuse not to try it!
Posted by jennyfreckles at 07:00