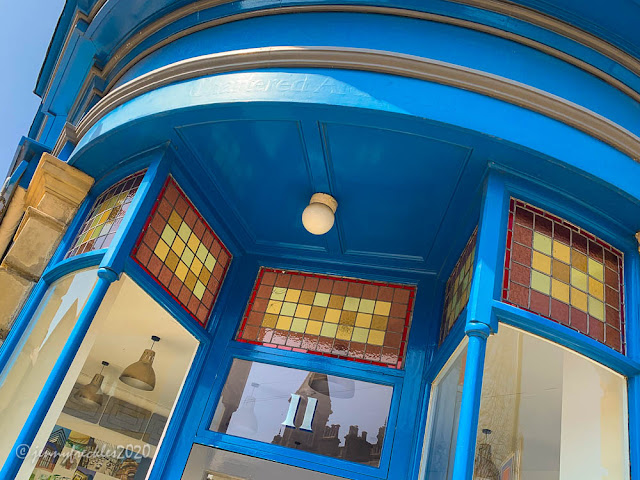 I pass this doorway at the corner of Victoria Road and Caroline Street several times a week and one day - as sometimes happens - the way the light was catching it gave it a whole new beauty. The coloured glass panels positively glowed and I noticed the Victoria Hall's tower reflected in the central window.

The building is now part of the offices of chartered architects Rance Booth and Smith, who have restored and imaginatively reinstated aspects of the original building to provide office space that is both contemporary and historical.

When it was first opened in the late 1850s, the corner shop was a grocer's, before becoming a specialist bakery in the early 1900s. By 1937, trading as H W Ready, it was apparently 'the place to go' for catering for weddings and funerals. By the 1960s, as new, more modern shops opened in Shipley and the mill contracted, demands changed. There were at that time three bakeries in Saltaire in close proximity. No 11 had a change of use and became a furniture shop, then a TV repair shop, later a wool shop and then a seller of artificial flowers. Rance Booth and Smith took over in 1989.  It would be interesting, I so often think, if walls could talk. What stories these old buildings would tell.
Posted by jennyfreckles at 07:00