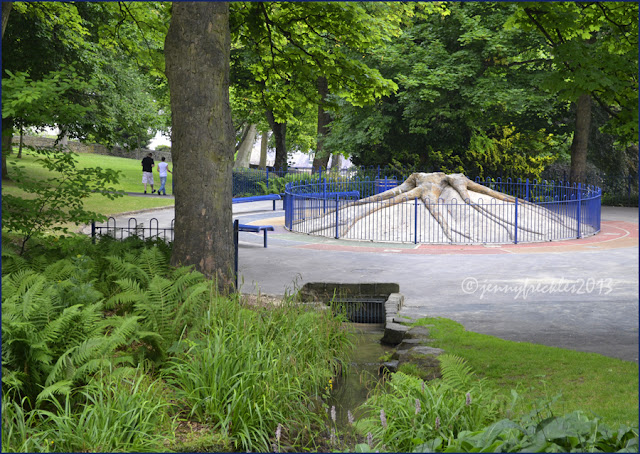 An old fossil... no, not me! This fossilised tree root displayed in Bradford's Lister Park is something else  that I have long been fascinated by. It was discovered in 1889 in a sandstone quarry in nearby Clayton. In carboniferous times, 330 million years ago, Yorkshire was a hot, steamy, tropical swamp with forests of giant trees. This tree was 40 metres high, with a huge spreading root system. The trunk must have been snapped during a flood or storm. The decaying hollow stump filled with sand, which over millions of years hardened into sandstone rock and the tree stump and roots became a fossil, known as Stigmaria. The outer wood layers became coal and the leaves and stems of plants decayed to form peat which eventually turned into seams of coal. Coal was at one time mined for fuel all around this area but the supply is now exhausted.

(Yorkshire is hot, steamy and tropical again right now... I think it's called summer.  So long since we had one, I can't remember.  I have not noticed any giant trees though.)
Posted by jennyfreckles at 07:00