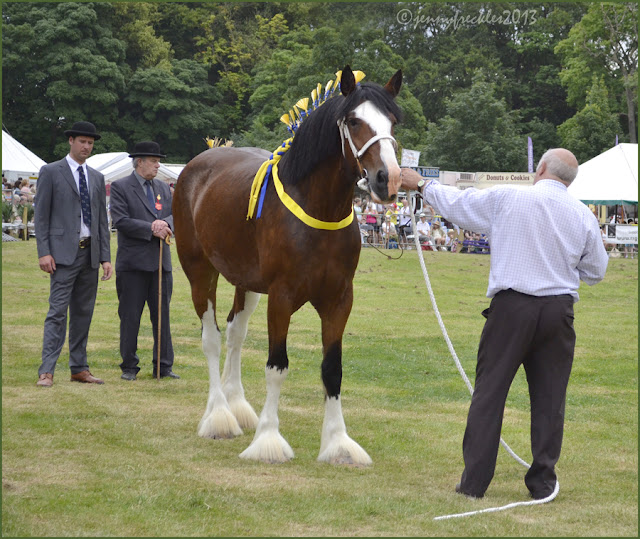 As big as Titan the Robot (see yesterday), but much more appealing (to me anyway!) the shire horses returned to Bingley Show. They don't bring stallions, which can be quite a handful, but there were a few mares and their foals. The adult horses, like this mare above, stand six foot at the shoulder. At less than a year old, the foals were as big as your average pony. Even the young ones have the characteristic feathering around their feet, silky hairs which float as the horses trot, making these huge beasts look curiously light-footed.

The judges were very smart in their suits and bowler hats (which you rarely see anymore). I'm not sure why this is the ensemble of choice.... Some readers will no doubt remember Mr Bradford and Mr Bingley, the two bowler-hatted cartoon characters! They advertised the Building Society that at one time had its HQ in Bingley. It eventually demutualised and became a bank but then became a victim of the banking crisis in 2008, resulting in the bank being split and partly nationalised. Its main office building in the centre of Bingley - a concrete brutalist monstrosity - stands empty and decaying. Bought by the supermarket giant Sainsburys, they have so far done nothing with it. There were people with a petition at Bingley Show, complaining that Something Must Be Done - and I tend to agree!