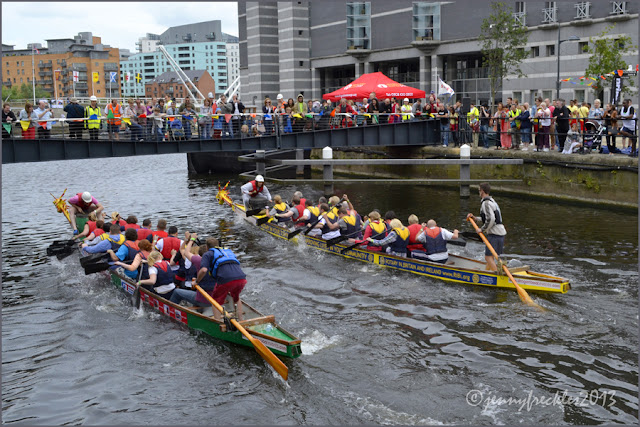 Dragon-boat racing in the New Dock at the Leeds Waterfront Festival. A dull and chilly morning was enlivened by the colour and spectacle of these amateur races. I've never actually seen this sport before and I don't know much about it. Apparently it originated in southern China and the modern version has only been taken up internationally in the last few decades. It basically involves large teams of paddlers, spurred on by the beats (and shouts) of a drummer. The boat is steered by the guy standing up (quite a dangerous role, I guess... especially when they had to duck under the bridge!) The crews looked pretty raw to it, though very enthusiastic - there was plenty of water flying about. The boats had to be bailed out in between heats! I believe the teams are drawn from charities, groups and businesses in the area. The races have become something of a tradition at the Festival, which showcases the recently redeveloped waterfront area in Leeds, along the canal and river.
Posted by jennyfreckles at 07:00