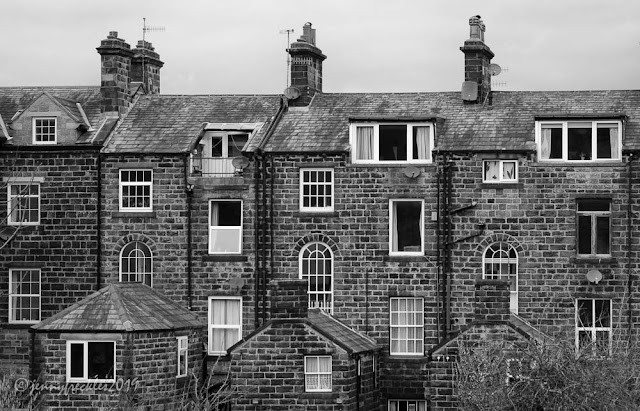 I generally try to avoid taking the same photo twice, although it can be a fascinating exercise to log the changes over the years. Here is an exception. I am fascinated by all these windows in the houses bordering the path down from Ilkley Tarn. I first noticed and photographed them in 2010 (see HERE) and, since then, very little appears to have been altered. I still find them oddly compelling, and a black and white conversion still seems to suit the image best.

Elsewhere in Ilkley, things are changing. The Rombalds Hotel has closed, as the owners decided to retire after 22 years and could not sell it as a going concern. It is now being converted into nine apartments. Ilkley is a popular place for well-heeled retirees and there are already a lot of apartments, in converted older buildings and newly-built blocks. The developers obviously think they can sell a few more.

Of more concern to me was the fact that the public toilets in the town centre were closed! I'd understood that the local town council had taken them on, when they were earmarked for closure by Bradford Council last year. So whether their recent closure is temporary, for repairs, or permanent, I'm not sure. It always seems daft to me that the only alternative is to pay for a coffee in order to be able to use a café's facilities - and then an hour or so later you just need the same all over again!
Posted by jennyfreckles at 07:00