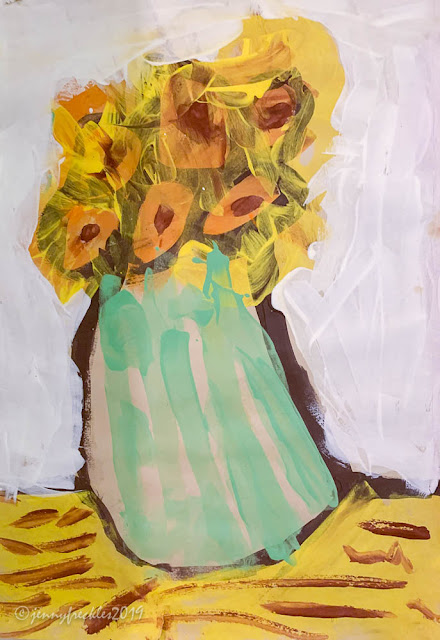 Well, that was a bruising result in the General Election. I spent most of the 'morning after the night before' feeling numb and disbelieving. I think at the moment what hurts most is that lies and obfuscation seem to have won the day. I haven't the heart, nor is this the place, to go into detailed analysis. I do, however, fear for the future and for my grandchildren's future. I hope (pray) my fears are proved wrong.

On a more positive note, my extended family went out for a Christmas meal on the evening of election day and we had a very happy time. Back at my daughter's house afterwards, I noticed these two pictures pinned up in the kitchen. Both were created by my granddaughters at school. Both brought rays of sunshine into my life. 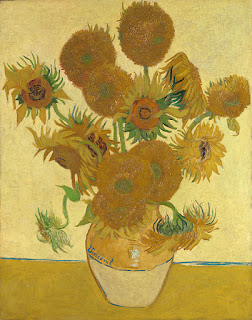 Elodie's sunflowers were a response to Van Gogh's famous picture (left) and I really love her version. Inspired by but not a copy of; she has really interpreted it in her own way. It's interesting that from quite an early age she seems to have particularly enjoyed making paintings from her careful observations of actual objects or other images, rather than from her own imagination (though she also does that too, of course). In this painting, I particularly like the freedom she's allowed herself in some of the paint strokes.

Madeleine's figure drawing is maturing, as it does. There's an interesting article about a child's development in art HERE and it suggest she is quite age-appropriate. (She's just five.) Her figures have 'a clearly differentiated head and trunk, with arms and legs in the appropriate locations'. There are details: hair, fingers, fur on the dog. She has also included a baseline, with the figures lined up along the bottom of the paper rather than free-floating in space.  Clearly, she feels the dog is an important part of the family now, though they have only had it for three months. She has drawn her daddy with his arm in plaster. He broke his wrist a few weeks ago! 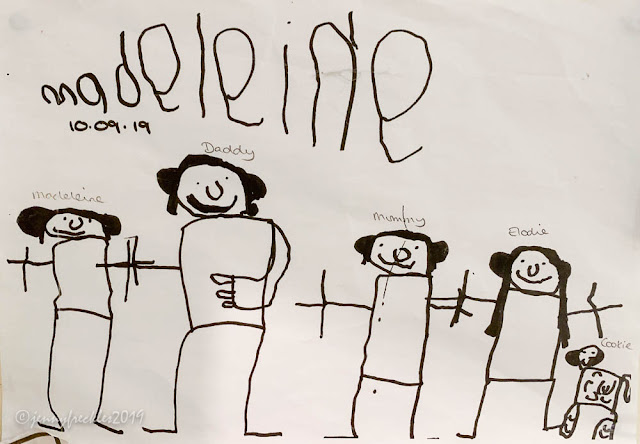