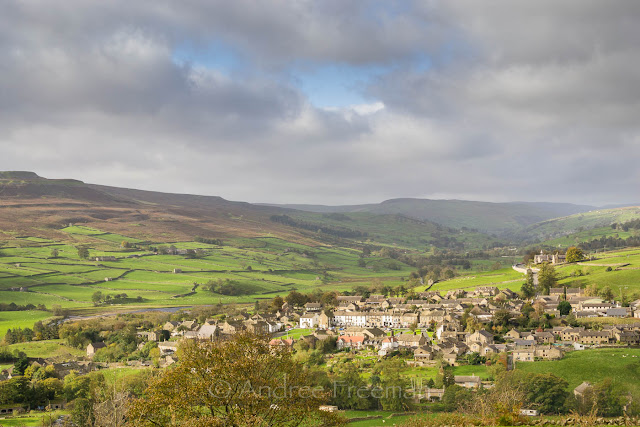 I've recently had a few days holiday up in the Yorkshire Dales. I went with a walking group over to Swaledale and we did a long walk from the village of Reeth (pictured).

Reeth, situated where Swaledale meets Arkengarthdale, grew and became prominent owing to lead mining in these two valleys in the 18th and 19th centuries. It is now the largest village in upper Swaledale and has become a centre for tourism as well as a focus for the local community.

Each of the Yorkshire Dales has its own distinct character. Swaledale, the most northerly dale in the Yorkshire Dales National Park, is limestone country, shaped by Ice Age glaciers. It runs west to east from the Cumbria border down to the market town of Richmond, where the dale meets the lowlands. It has meadows in the valley bottom, sprinkled with typical stone barns and laced with drystone walls, rising to heather moorland on the hills.
Posted by jennyfreckles at 07:00