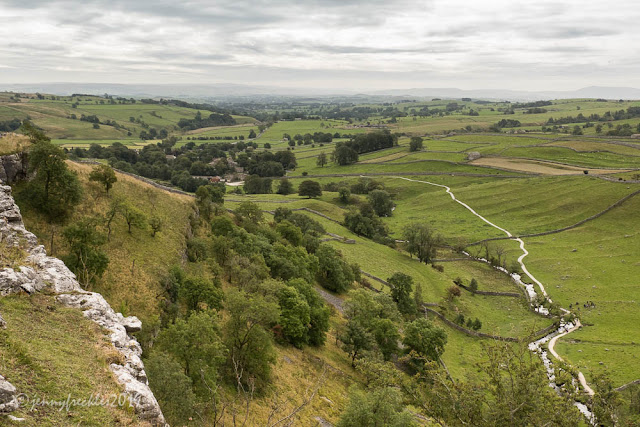 There's a glorious view from the top of Malham Cove, down to Malham village and way beyond. You can perhaps just see the distinctive whale-back of Pendle Hill on the horizon to the right. That's in Lancashire! The wiggly white line in the photo is the footpath that leads from the cove to the village, surfaced with limestone chippings to prevent erosion from the feet of the thousands of visitors who come to see this magnificent landscape.

There is a limestone pavement at the top of the cove, great blocks of limestone clints dissected by deep fissures known as grikes. There are some unusual plants that grow in the clefts. My young friend hopped nimbly over the treacherous rocky surface. Me... I went the long way round across the fields at the back! But I still had to brave the long, steep staircase cut into the rock down from the top to the base of the cove. It makes my thigh muscles tremble! Worth it though, for the view you get back up to the curved limestone cliff, 300m wide and 80m high, formed by glacial meltwater in the last Ice Age. It always reminds me of a theatre auditorium. These days the water seeps out from the base of the rock. On very, very rare occasions (like the floods of winter 2015), a waterfall does still cascade over the lip. See HERE for spectacular footage of that event. 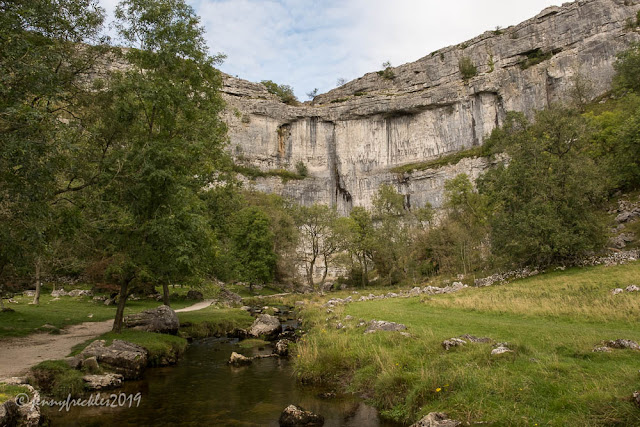