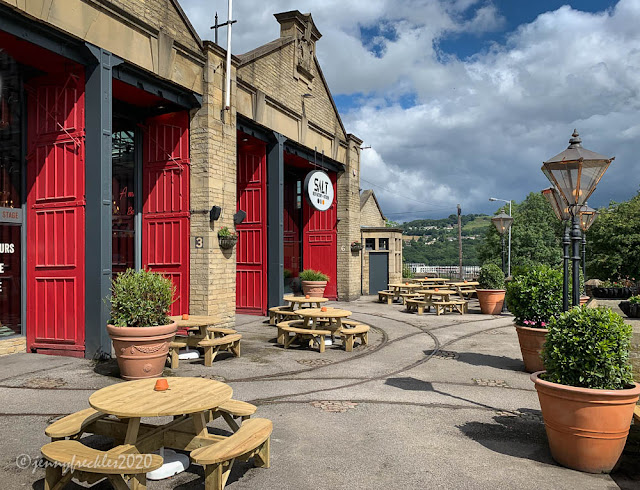 I don't know that I've ever consciously noticed before that there are still tram rails embedded outside what used to be the tramsheds at the top of Saltaire Road. Built in 1904, the six bays used to house the trams that ran from Saltaire to Bradford, guided on rails and powered by a pantograph that linked to an overhead cable. Later they housed Bradford Corporation trolley buses, which ran solely along overhead cables with no tracks. Bradford had some trolley buses right up until 1972 (though the Saltaire link ceased before that, I think.)

Since then the building has been repurposed a number of times and for many years now has been a bar and restaurant, at first called The Old Tramshed, then The Hop. Now it is the Salt Beer Factory, opened in 2018 with a micro-brewery and tap room to the rear and the bar/kitchen (restaurant) and beer garden at the front. It has recently reopened again after being closed because of lock down. Testing times for such small outfits but they have been doing local deliveries and selling canned beer to retailers in the interim and, with a loyal following, I guess they'll manage to keep going.