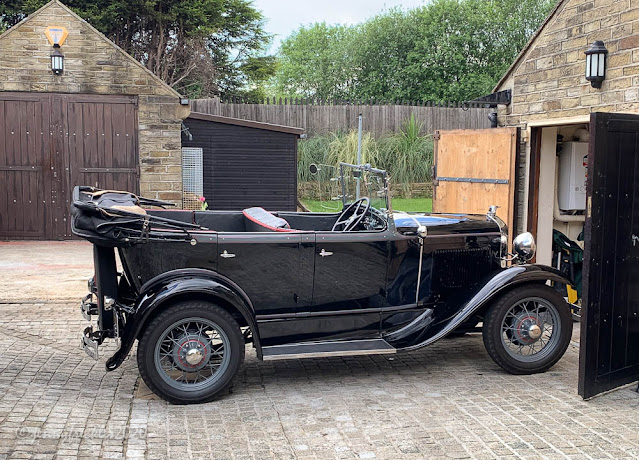 Walking down Dock Lane towards the canal, I happened to pass a yard and noticed this lovely old car. A guy was working on it so we got into conversation, which proved to be most interesting.

The car is a 1929 Model A Ford, which the owner said he had rebuilt from scratch. He now uses it for pleasure trips and at 1940s re-enactment events. I'm no expert but it looked beautifully restored and appeared to be in pristine condition. He told me its top, bone-shaking speed is 35mph so it obviously cannot be driven far on normal roads but he has a large van into which it fits, so he can drive anywhere and unpack it when he arrives.

This little cluster of buildings comprises the old pumping station for the Bradford Branch canal (below), alongside an even older lock-keeper's cottage. I first mentioned them on my blog HERE. Chatting to the owner of the car and cottage, he told me something of its history. As I mentioned yesterday, the Bradford Branch canal, opened in 1774, suffered terrible pollution and caused a canal-side outbreak of cholera after which it was closed for a while. It seems that a lack of fresh water flow was the problem so the pumping station and system was built in 1872, to bring in water from the main Leeds-Liverpool canal.

There was a lock behind where the pumping station is now. The lock-keeper's cottage was built at the same time as the canal, when it was a tiny one-up, one-down place. In the 1800s it was extended, more or less doubled in size. The canal, as I said yesterday, closed in 1922 and was filled in in the 1950s. The man I was talking to bought a parcel of land and the buildings many years ago. He commenced a painstaking restoration, extending the cottage some more but retaining many of its old features. He converted the pumping station for residential use and sold it on.

Later, the pumping station house again came up for purchase and was bought, strategically, by Bradford Council, apparently with an eye to the planned regeneration of the canal and canal corridor down into Bradford. Of course that was an ambitious scheme that came to naught and the pumping station remains empty and unused, no doubt deteriorating as time goes on. It seems a great shame as potentially it is a lovely house with an interesting heritage. 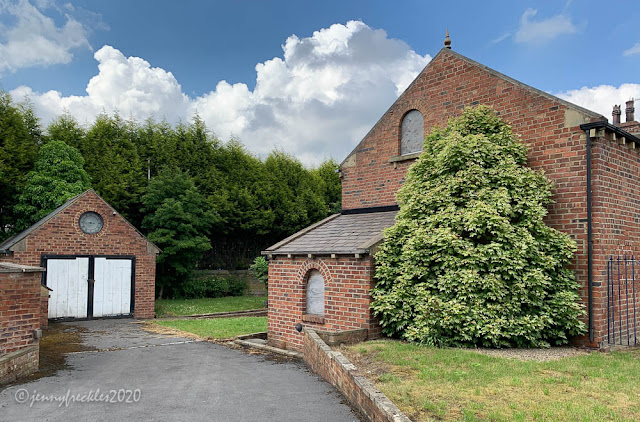