One of those days!

The rain came, after a spell of hot, sunny weather, and not just rain but wind and thunderstorms too. It wasn't enticing to go out. On top of that I had a few days of feeling rather fatigued and achey - nothing serious and hard to tell if it was actual or simply a result of feeling fed up of the pandemic and the world in general... Anyhow, when I felt a little better and the rain stopped, I decided I should make myself have a walk, just my usual local circuit of river and canal, travelling light with only my phone.

I read somewhere recently that you can take photos on an iPhone by pressing the volume control. I decided that might be easier in some situations than reaching for the white 'blob', so I tried it. It was only when I got home that I realised I'd taken screen shots and not proper photos. Doh! Never mind, they weren't going to be masterpieces anyway.

Hirst Weir was in full flow after the rain and a group of kayakers were having a well-earned break after battling the river. I wonder if they carried the boats past the weir or if they tried white-water rafting? I hope not the latter, as it must be quite a dangerous spot with so many rocks and no clear channel through.

My walk threw up a few mildly interesting nature notes:
a tall and striking plant by the river's edge that I didn't recognise, in appearance not unlike a foxglove but with bell-shaped flowers. It appears (after consulting my wild flower book) to be a giant bellflower. (I might have guessed!)

The local cormorant had taken up a roost in the river by Roberts Park. 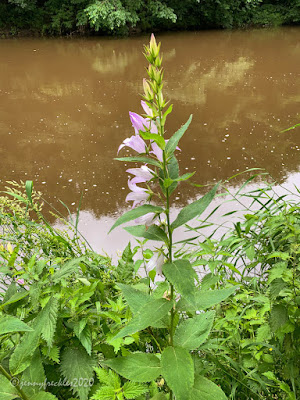 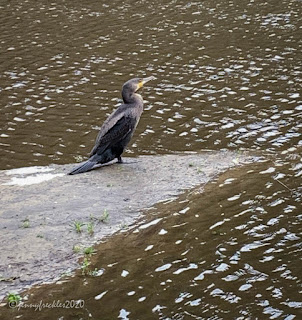 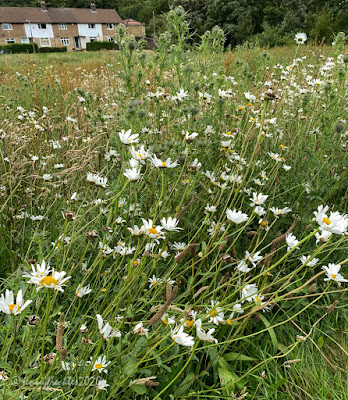 The new nature reserve's wildflower meadow is rampant, though hard to tell if there are any interesting species yet. It seemed to be mostly thistles and ox-eye daisies.

As I was returning along the canal towpath I spotted another tree newly collapsed and blocking much of the width of the waterway;  a victim, perhaps, to the recent drought followed by the strong wind and rain.  The kayakers, by now on their return journey and choosing the canal rather than battling upstream against the fast-flowing river, were having a little difficulty finding a way past the obstruction. 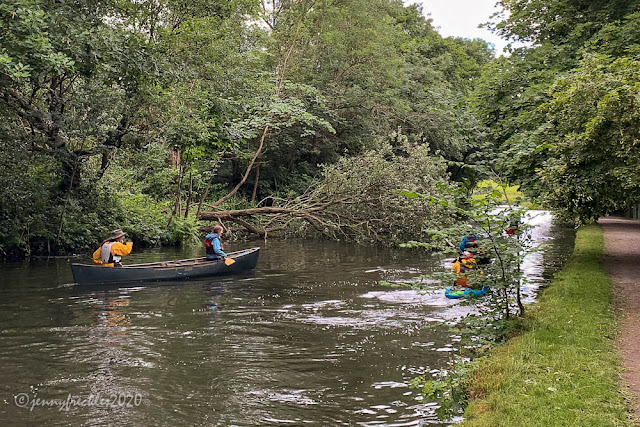