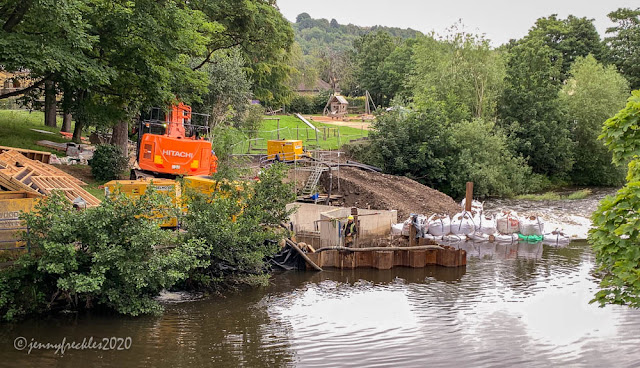 Salmon chanted evening, you may see a stranger... no, a salmon, leaping the weir at Saltaire. That's the theory, anyway. I mentioned back in March (HERE) that they were starting to construct a fish pass, with the aim of encouraging salmon and other fish to negotiate the weir to spawn in the upper reaches of the River Aire, something they have not been able to do for decades, as the weirs are too long and steep for the fish to leap. It's clearly a bigger project than I imagined and despite the recent rain causing the river to flow deeper and faster than it was doing back in March, they seem to be making progress. The concrete walls seem to be almost finished. There's an impression HERE of how it may look when complete.

In the background, the children's playground remains locked and unused. Such a shame. It would be nice if they could unlock them again for the school holidays. I can't imagine there is too much danger of the virus spreading outside, though I think it's the probability of lots of people touching the same surfaces that is the real issue.
Posted by jennyfreckles at 07:00